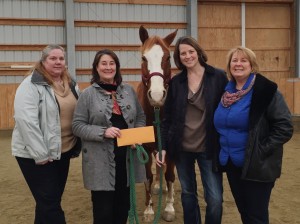 HAYMARKET, Va. (December 20, 2014) – Rainbow Therapeutic Riding Center received a $5,000 donation from a growing group in our region called 100 Women Who Care Northern Virginia. The money will be used for scholarships for students who come to Rainbow Riding as part of their therapy. Participants include wounded warriors recuperating at Walter Reed National Medical Center as well as children and adults with cerebral palsy, spina bifida, blindness, deafness, Downs Syndrome, Autism and those with learning or emotional disabilities. All therapy is integrated into the student’s current program, with the referral or clearance of the person’s physician or therapist.

The nonprofit was selected as this quarter’s recipient of funding from 100 Women Who Care Northern Virginia, a group of women who meet quarterly and direct funds to an area nonprofit. “This significant gift is essential for providing our services at an accessible cost,” said Debi Alexander, Executive Director of Rainbow Riding. “Every single rider at Rainbow receives at least a two-thirds scholarship.”

Ms. Alexander explained how testimonials from their students prove how significant the programs Rainbow provides are in their lives. “One of our intellectually delayed riders recently shared that on his 18th birthday his mother handed him a garbage bag with all of his clothes and sent him out the door. He was homeless for a short while and is now living in a group home. This young man said that his connection to his instructor at Rainbow kept him feeling like he still had someone who loved him.”

“Another family who rides on full scholarship consists of two young daughters who were abused by their father, who is now incarcerated. At a recent lesson, their mom shared that Rainbow is the one place they have peace in their lives. On top of trying to heal from horrific abuse, they live in a crime-ridden neighborhood where there is always screaming, fighting and the sound of police sirens. It is a frightening atmosphere to try to raise a struggling family.”

Another rider, who is a 30-year-old quadriplegic man, summed up the benefit of Rainbow Center’s programs. He proclaimed, “Riding at Rainbow makes me feel invincible!” Ms. Alexander then stated, “And that is what your gift will do – help give people living with hardship and challenges hope and freedom on the back of a horse.”

“I truly believe that animals have healing energy and an ability to reach people in an innate way that is complementary to other therapies offered by traditional medicine,” stated Traci Richards, co-founder of 100 Women Who Care Northern Virginia. “Being able to give $5,000 to another deserving and wonderful program is just humbling. A gift this size is truly impactful and all of us at 100 Women Who Care are honored that we have the ability to pay it forward.”

Each quarter, a group of women from all over the Northern Virginia region come together and collectively pool their money in order to make one large donation to a nonprofit group in our community. All Northern Virginia women are invited to join 100 Women Who Care. Meetings are held the first Thursday of the months February, May, August and November. The February 5th meeting will be held from 7:30-8:30 at The City of Fairfax Regional Library located at 10360 North Street in Fairfax. For more information or to sign up, visit www.100wwcnova.org.

About Rainbow Therapeutic Riding Center
Rainbow Therapeutic Riding Center was established in 1985 as a nonprofit organization with the purpose of providing equestrian activities to individuals with physical, educational, emotional, intellectual and other challenges in Prince William and the surrounding Northern Virginia areas. Over the years, hundreds of clients have benefitted from the work their staff, volunteers and horses provide and they have grown to include services for wounded warriors. Their facility is “handi-capable,” with no detail overlooked to ensure the safety and independence of their clientele. You can learn more by visiting www.rainbowriding.org.